Introduced in 1959 the Triumph Herald was designed by

Giovanni Michelotti (designer for most of the Triumph range in the early ‘60s and a number of Maseratis and the Reliant Scimitar). The two door car was available in saloon, coupe, convertible, estate and van versions. The Herald was built using a separate chassis with bolt-on body sections at a time when when most other manufacturers were moving towards the more modern monocoque construction. Originally with a 948cc engine, this was increased to 1147 after Standard-Triumph was taken over by Leyland Motors (later BL) in 1961 and re-launched as the Herald 1200. It was well renowned for it’s high all round visibility and it’s tight turning circle making it a popular driver instructors car.

The car was joined by the Vitesse in 1962, with a re-worked twin headlight front end and a straight six 1600cc engine. Increased performance came in 1966 with the introduction of the 2 litre engine with a 0-60mph in 12 seconds and a top speed of around 100mph. Fuel consumption of around 25mpg.

In 1967 the Herald 13/60 was introduced, this used the more aggressive “slant-eyed” look of the Vitesse but with single headlights. The 1200 was discontinued in 1970, the 13/60 and Vitesse discontinued the following year being replaced by the Triumph Toledo/Dolomite range. 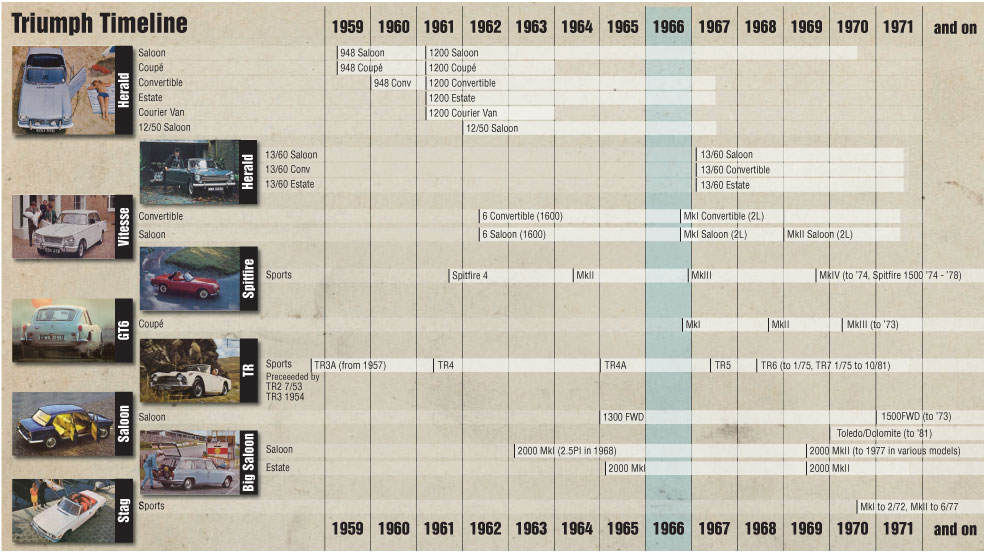 As can be seen on the above Triumph timeline, in 1966 Triumph were producing the