As part of the new drive to attract new members, Mike Carroll, area organiser, has re-instigated the monthly meetings and, in an attempt to attract new members, has suggested to hold the meetings in different parts of Norfolk. Judging by the turn-out at this the first one it is a cracking idea. Meeting up on the A47 layby at Easton a convoy of around 7 Triumphs (plus a couple of dailies) we set off for Wild Fowler pub in Kings Lynn, via Dereham pick-up of a few more Triumphs. Not the best of weather, but then it was the beginning of February and could of been a lot worse. Hopefully this will be the start of something regular.

Aiming to move out of Norfolk this year and go further afield to a few shows, starting with this run on Drive It Day. This went from Upminster to Layer Marney Tower near Colchester, with over 200 cars following a tulip route. Great mixture of classics including the local Aston Martin Club with 12 cars, a selection of Rolls Royce and Bentleys. The most popular make seemed to be Triumphs with an abundance of TRs and four Vitesses and of course one Herald.

A 50 mile trip through the Essex countryside (who’s potholes are far worse than Norfolks incidentally) ending up at the Layer Marney Tower for a picnic and stroll in the grounds.

Everything was going fine until it was time to leave and I couldn’t get the old girl in gear. So this meant bonnet up and a crowd immediatly appeared, thankfully with some useful advice, but unfortunately nothing that could fix it. So with a bit of encouragement I decided to try driving home without a clutch. Stopping off at my brothers for a brief cuppa we continued to my girlfriends house the other side of Ipswich. A 50 mile drive in total all without a clutch. Luckily my passengers powers of persuasion could induce all the traffic lights to be green and the roundabouts to be clear. Decided not to continue the rest of the way and called out that very helpful man to bring me home.

New master cylinder has now been ordered and will have to be in before the next show in a couple of weeks.

Brand new show organised by Triumph clubs in the Eastern region – Stag Owners, TR, TSSC. With my new clutch master cylinder fitted I was ready to go. Getting there for the Saturday evening we had a meal in the campsite pub then took in the live band and even had a bit of dancing. Good to meet up with folks and have a natter over a few pints. Great night was had by all. Then the Sunday and day of the show. Awoke to a downpour that kept on re-appearing on a regular basis which, understandably I think, kept most of the day trippers away. But there was still around 30 Triumphs in the field. Leaving mid afternoon to a drive in pouring rain. The day being a bit of a wash out really. Next years should be better!

Glorious weather for this weekend. Heading down on the Saturday for an overnight camping trip. Sunday morning saw us heading off to Brooklands. First time here and was impressed by what was on show. Always good to go to a car show where there is something else to see. Couldn’t resist the urge to go up the Brooklands test hill and as always couldn’t keep my right foot from hitting the floor. It must have been one of the bumpiest roads I’ve ever driven on (it was 100 years old).

Then the 3 hour drive home, been a long time since I’ve had the roof down for so long. Great weekend!

This worked really well a pre-show meeting with a run to the show. Met up at Friday Street just off the A12 where there just happened to be a boot sale. Along with around 20 other cars, we got our sheet of directions and off we went. Sun was shining and roof was down. Got to the The Suffolk Punch Trust, Hollesley in Suffolk after a short drive and lined up for the show.

Must admit I was expecting a bit more and a few more cars would have been nice. Shame really it was well organised and should have been a lot busier. Although the clouds came over around lunchtime, followed by rain which became pretty constant by 3pm so guess that might of put people off.

TSSC Norfolk meet with TR Club, July 2014.
Now welcoming any classic makes for an interesting display of 30 classics at the Bird in Hand, Wrenningham including MGs, MX5s and a couple of Ford Escorts.

Starting off two weekends of car shows. A drive to a campsite near Corby for a few days stay attending this show on the Saturday and Nene Valley on the Sunday.

Formerly the TSSC International previously held at Stafford, this made for an interesting change of venue. A good selection of Triumphs in the “car park” including a few Coupes there for Sundays display. Had three laps around the Heritage Loop, where I should possibly have gone a bit slower than I was. Great weather and a good day, but worth the entrance money? I think not, which was a great shame.

Second car show of the weekend, and a much more interesting show. Small, informal and friendly. Soon to be a victim of it’s own success I would think. Good selection of around 70 cars on show, Had a ride on one of the locos. It’s always good to have a show with other attractions as well. A good day out. Only regret? there was a nice Fiat 500 I should of taken a photo of.

All in all a good weekend with over 500 miles covered, roof down in glorious sunshine the whole time. 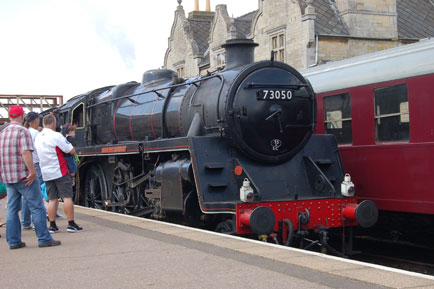 Second weekend in a row with car shows on the Saturday and Sunday. First time for this one. A trip around a number of churches starting from Norwich Cathedral. We visited around 9, some with refreshments most were open especially for the 90 odd classic cars on the run. Great day of driving through villages you’ld otherwise never see.