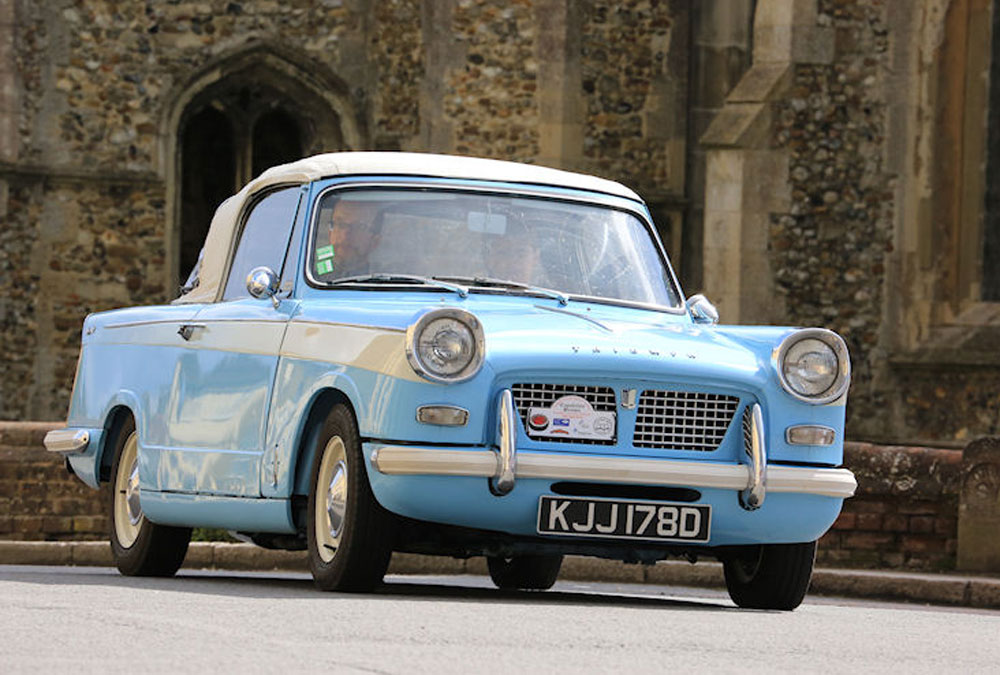 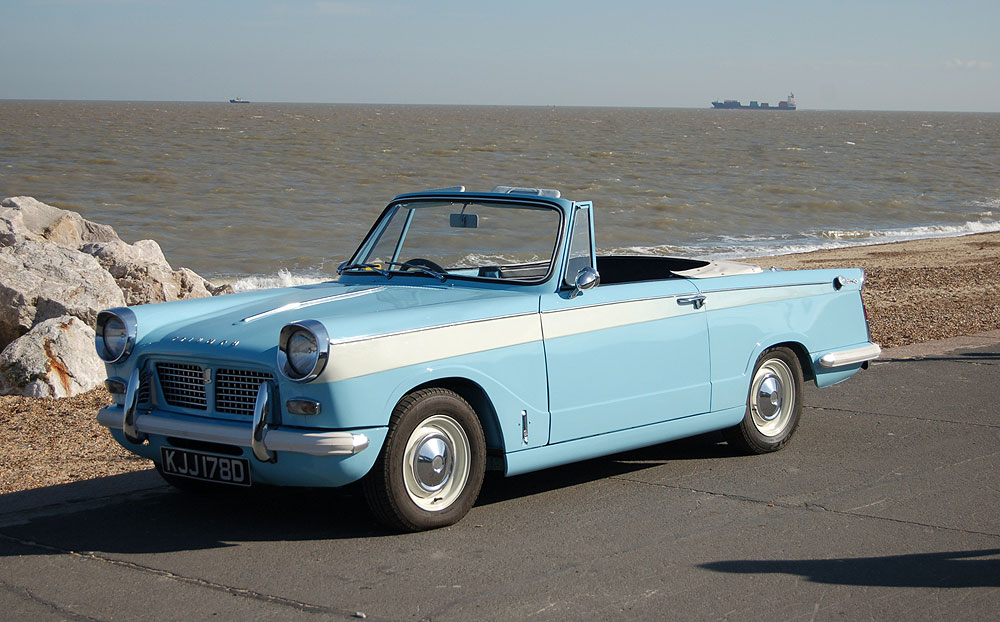 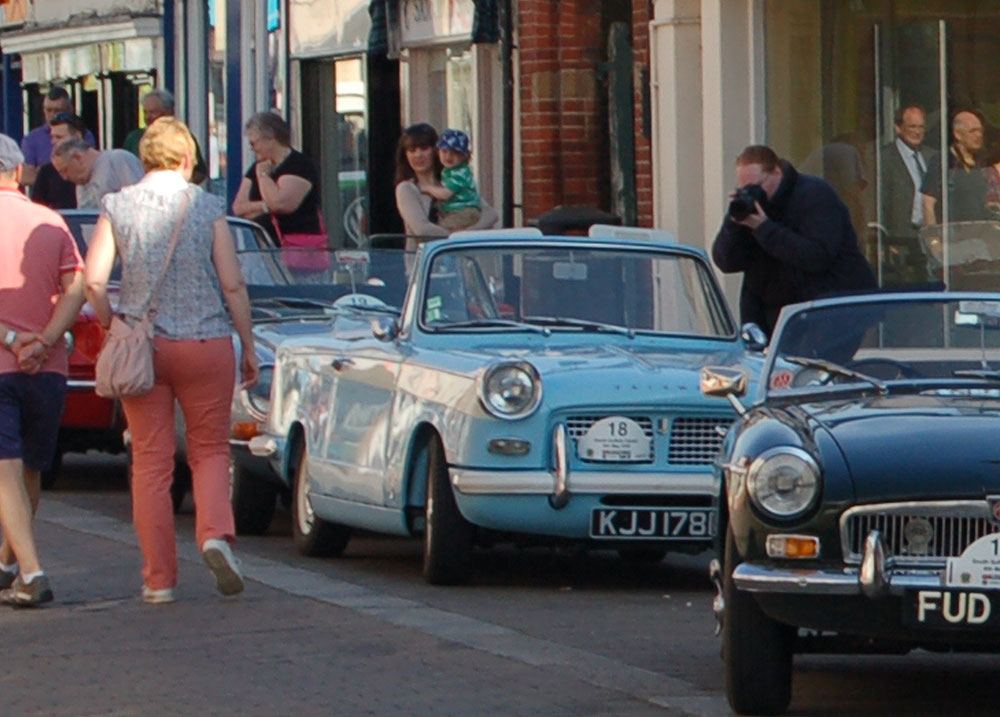 A well organised run which with only 40 cars, deserves a lot more entrants.

It’s been a couple of years since we visited this one. Weather wasn’t looking good for the day but still managed to get the new hood down for the first time. Turnout was good, at least as far as the cars went, although the show didn’t seem that busy. Plenty to see and do with Cossack Riding display, and steam engine parade (always good to see things moving). And of course the usual crafts. Even had a fly past by a Mustang.

Discounting a couple of trips round the block, our first proper ride out with the herald towing our newly acquired Viking Fibreline caravan (aka Bluebell) was to the Cakes and Ales campsite at Theberton. Although only a few miles up the road, it was a journey made with great trepidation over how the old girl would cope with her new task. The fact that it was pouring with rain didn’t help the nerves, but arriving at the campsite to be greeted with “Wow, that is fantastic” by the manager, helped to reassure us that it was a worthwhile thing we are doing! Pitching was easy on a nice level site and the kettle was soon whistling away. The back end of the herald seemed to have dropped slightly, which was worrying and Paul started talking about replacing springs and suspension. After spending some time that evening researching over a pint, we realised that we needed to put a bit more thought into loading the ‘van to get better weight distribution. After spending a comfortable night, we moved some of the heavier items around and hitched up for the journey home. It was a useful first trip, with a few lessons learned and questions that needed answering. 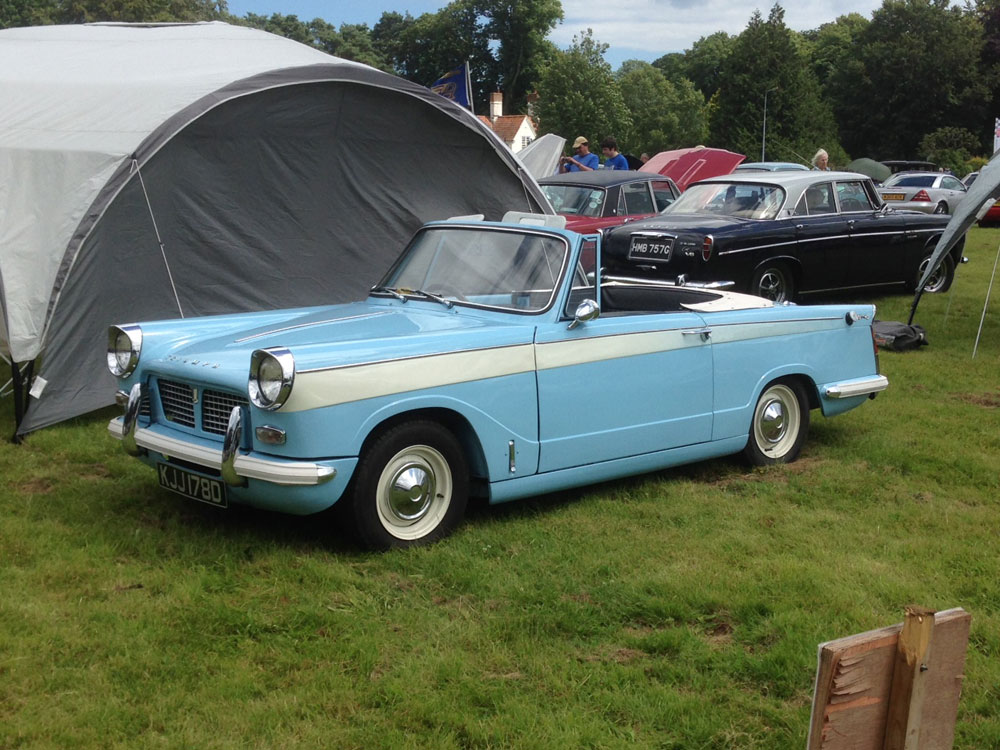 Went to this one last year and really enjoyed it. With the railway and buses operating makes it means there is plenty to do and too good a show to miss. Stayed over in Kings Lynn visiting parents (without caravan, perhaps next year). Got a place on the Pheonix CVC club area. large showing of cars and caravans – the new interest and gave us the opportunity to get some inspiration. Took the train to Sheringham for a wander around. That combined with the weather made for a good day out. 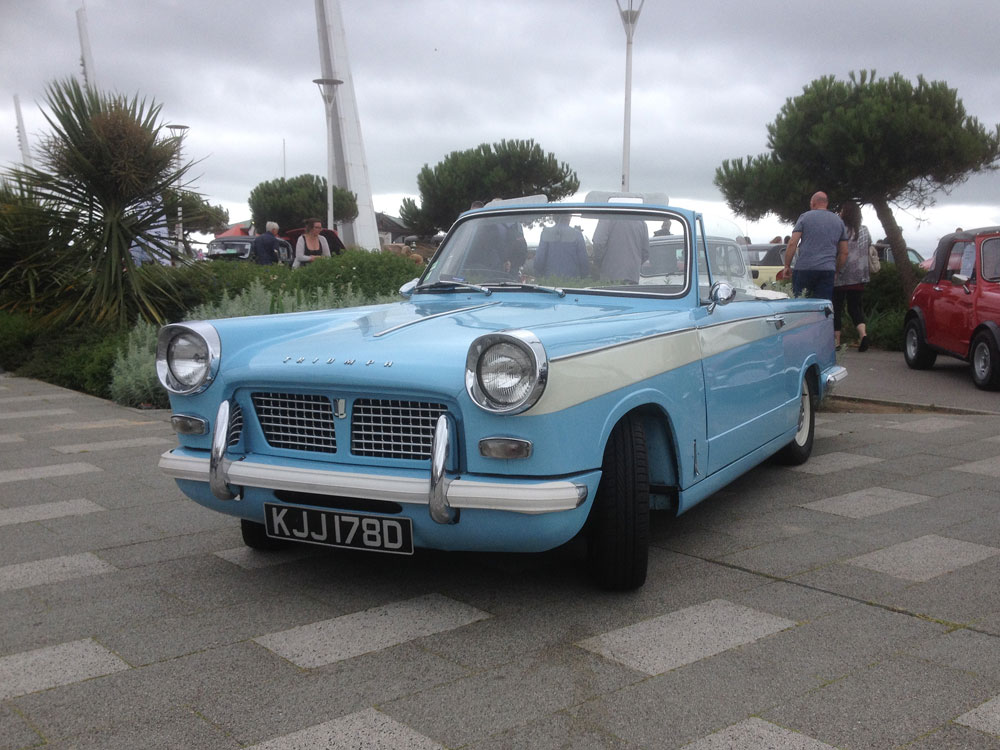 Another weekend with a lot of driving. Drove down to London on the Saturday to stay with friends, deciding that I really don’t like the A12 when it gets near to London and the North Circular even less. Got to Fairlop Waters for the start just before 9 on the Sunday morning. Had another friend waiting for us there who had popped down to see the cars start off. Picked up the tulip route, thought it might have been straight down the main road to Southend but instead had a very pleasant drive through the Essex countryside to get there. Arrived and parked up on the Southend seafront along with a good selection of cars, although I don’t think there was the expected 130 there, but still, a good show and with a fish ‘n’ chip lunch and ice cream a good weekend. 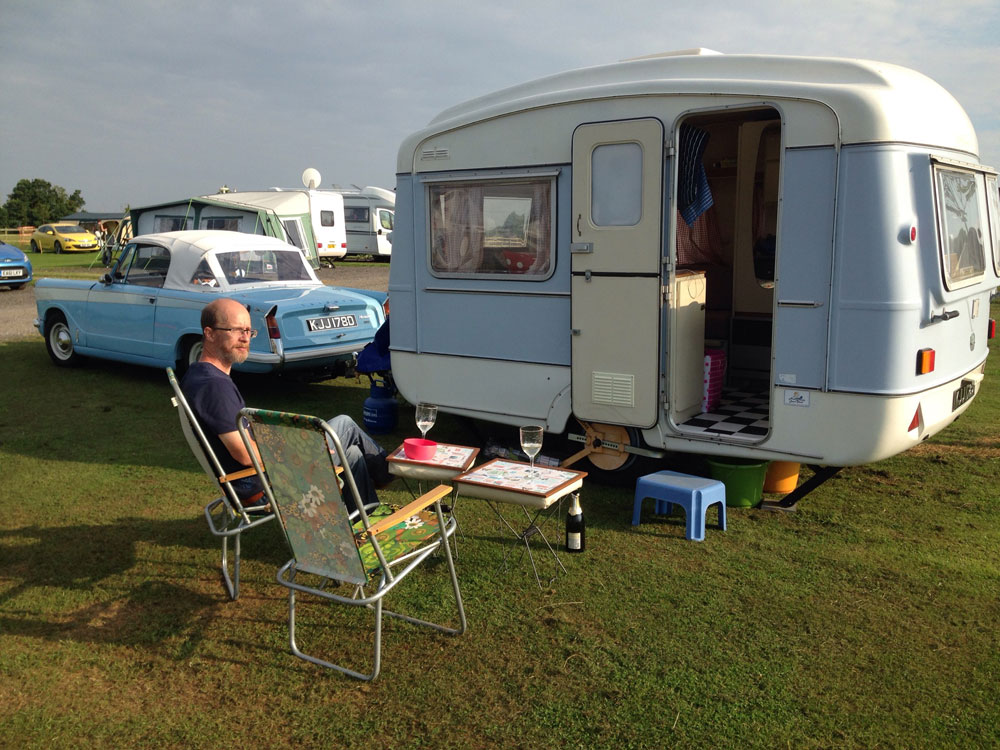 Four weeks after our first caravan trip and following several minor (and not quite so minor) tweaks to the herald (new suspension fitted, tyre pressure adjusted, stabiliser bar added), advice taken from experienced caravanners, and research around nose weights, we were ready for a slightly longer journey up the A14 to New Lodge Farm at Bulwick, for a long weekend taking in the Nene Valley Railway Show on the Sunday. Travelling at a steady 50 meant that our planned stop-off at the Cambridge Services took 2 hours rather than the anticipated 1 and a bit, but Paul was happy that the Herald seemed to be coping well with the task and even suggested that he was enjoying the towing experience. After a slight detour to visit family, we arrived at New Lodge to another enthusiastic welcome “can I just say, I am in love with your car/caravan combo”. This was our second visit to New Lodge, our first being two years ago when we had the camper and the herald, and it was good to see that the facilities were all as clean and fresh as they were two years ago, when the site was in its first season. We attracted a few glances as we parked up, and soon had people stopping to ask about our duo. The weather was beautiful and so Saturday was spent sitting by the ‘van doing very little. Christina got on with sewing new curtains for Bluebell, while Paul and the herald recovered from the journey. A ‘gentle evening stroll’ around the neighbouring fields became more of a route march as we got lost and feared we would not be back in time for the fish and chips we were planning to get from the site cafe, but we made it in time and spent a couple of hours in the bar chatting with other campers. An early start on Sunday morning meant that we arrived at the Nene Valley just as the gates were opening at 9.00, so we got a space in the show field. We decided to take the first steam train out to look around ‘Railworld’ in Peterborough, then be back to sit by the car for the afternoon. Unfortunately though, vandals had emptied the water tank at the Peterborough end of the line meaning that the engine had to be refilled by hose pipe which caused delays and a total abandoning of the timetable, so after walking round Ferry Meadows then returning to the station for the planned 14.40 train, we found we had missed a train by about 5 minutes, and the next one wasn’t due until after 5pm, which would mean that the whole car show would be over by the time we got back. After a chat with the man in the ticket office, he very kindly arranged for us to have a taxi back, at their expense, so we did get back in time to see most of the cars before they started to head off. Not quite the afternoon we had planned, but an experience nonetheless!
Monday was another restful day, with a quick trip into Stamford to pick up some provisions for our evening BBQ, and a stroll around the shops. An early start on Tuesday morning, good clear roads and a confident drive meant we were back home by midday and already looking forward to planning our next trip.

Today was to provide a much needed rest for the pair of us, and a relatively late start as it is only a few miles away. We arrived and parked within half an hour of leaving home and just as the promised sunshine was beginning to show. Helmingham is a popular show, with a few side stalls and the gardens to look round, and it soon got very busy. The main entertainment is watching the cars going down the concourse, although we felt that the commentary was a bit too long-winded with prolonged chat between vehicles drawing it out a little too much for all but the most avid of car enthusiasts. Being a local show, we bumped into several friends, both exhibitors and visitors.
A lovely, friendly show which we will certainly visit again. 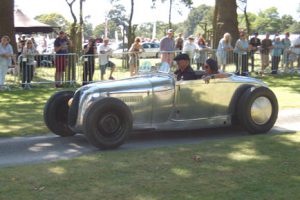 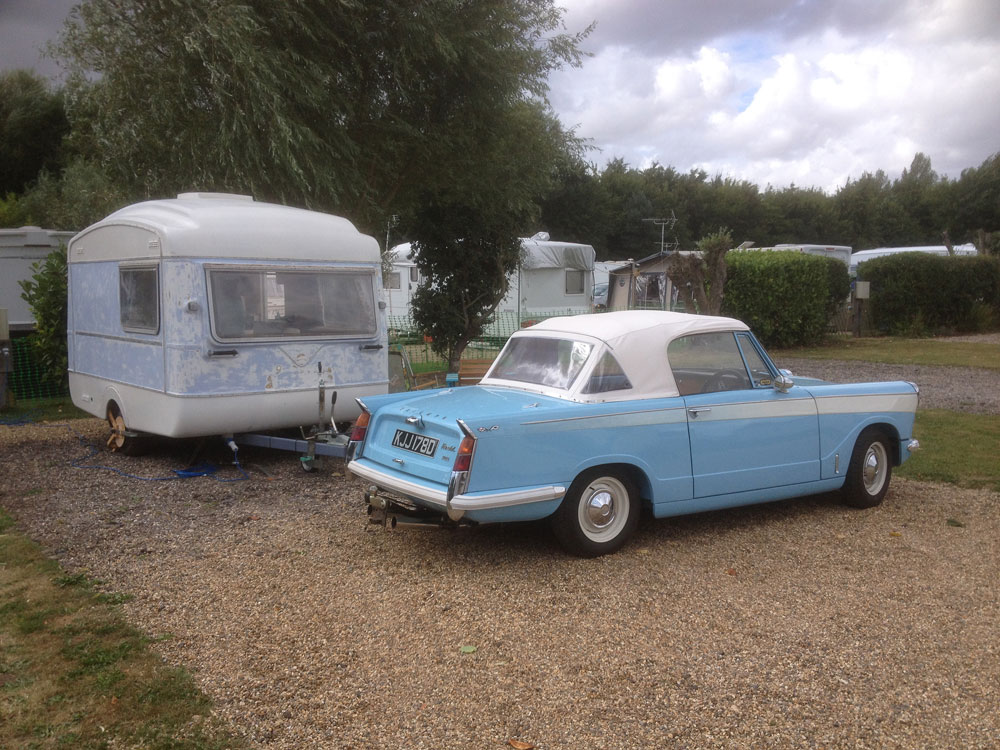 This was another fairly local show for us, and as there is a campsite next to the showground we decided to make a weekend of it. The caravan make-over wasn’t quite complete but still habitable so we set of just after lunch, taking the scenic route to avoid crossing the Orwell Bridge as it was very windy. After quite a noisy night, with the wind and the rain, the sun came out ready for the car show so we took Triumph round to park in the Phoenix stand and helped set up the gazebo. The day passed very quickly as we had plenty to do, with the car boot sale, various car stands, a chat to a couple showing their car/caravan combo and entertaining guests back at our caravan. We even came away with a pair of new wheel hubs and a genuine vintage radio for £15!