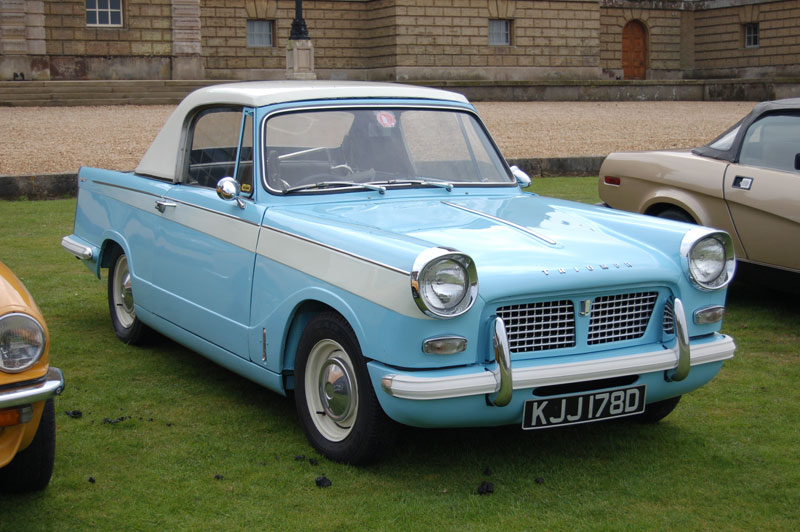 We were intending on driving up to TSSC headquarters for Drive It Day, but couldn’t really justify the 4 hour round trip, for what would probably be a fairly short visit, so decided to stay in Norfolk. Holkham Hall was chosen as a destination and a quick look on the web showed the local TR club doing a run from Wymondham to Holkham Hall with, even better, a 10.30am start. Even Chris was happy to get up for this one. Got to Wymondham and joined a group of about 12 cars, including Spitfires, TRs and the odd Stag and also a Powder Blue Vitesse with a white stripe.

The rain started just as we set off on route, around half way we stopped off at County School Railway Station for a quick tea break (after navigating along drive with numerous exhaust bashing speed humps). By this time water was coming in and soaking those sitting in the front, leading to Chris wanting to sit in the back for the first time I can remember.

Around 12 we arrived at Holkham Hall just as the sun came out. We were allowed to park in the front of the hall (far better than parking in the car park with the plebs). It was kind of Club Triumph to let us tag along and to make us feel so welcome, it made for a really enjoyable day out. 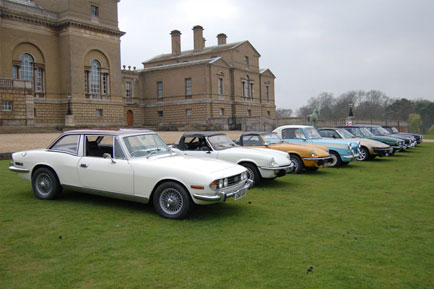 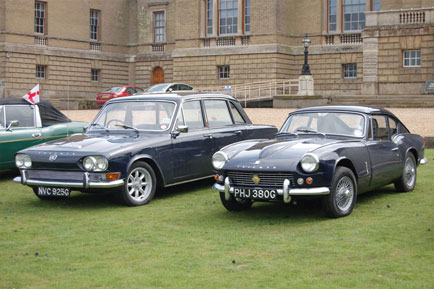 Following the weather all week as I knew I wouldn’t get any passengers if it was raining again. I’ld just finished replacing the core plugs and rebuilding the carbs. It wasn’t until the Sunday morning that we reckoned the weather would probably hold out, so at 9.30 we set off for the SEM show arriving just after 12, first call was the burger van. Followed by a walk around the field and auto jumble. A good cross section of Triumphs on show. Thought we’ld have time to have a look at the Leisure Centre, a promise to Chris to get him in the car, to let him have a work-out in the gym. Getting back to the field by 3pm in plenty of time for the 3.30pm prize giving, was a bit disappointed to find out it was all over, but the weather being as it was could understand the reason!

All was made (a lot) better when we were approached by somebody carrying a trophy – yes the old girl had won best Herald.

Got ourselves the last appointment with the mobile tuning guys (one of the reasons for going) and after half an hour ended up with a much quieter car. No tappet rattle, no pinking on acceleration or back firing when slowing down, making for a much better drive home.

A good day with a nice friendly bunch of people all saying nice things about the car, what more could a man want? 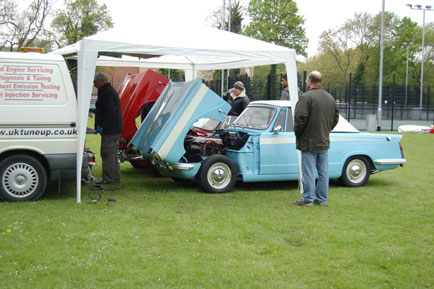 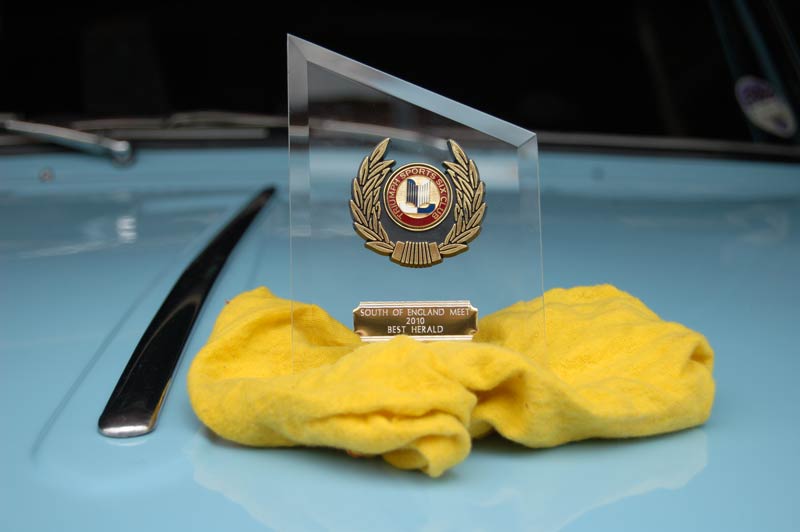 After much deliberation on whether to go such a distance for a car show, Chris and I left on a very hot and sunny Saturday afternoon. Deciding to take the slow route via the A505. We arrived at the Oxford Travelodge around 7.30pm, hot and sweaty.

It took us another 1 1/2 hours to get to Prescott Hill Climb (nr. Cheltenham) on the Sunday morning, arriving a bit late and ending up in the overflow car park on the side of a steep hill. Having not pre-booked a run up the hill we had to wait until 3.30pm until we got the chance. I was going to go slowly, but couldn’t resist putting my foot down at the start along the nice starting straight and once you start… I did mean to slow down at the corners, but they seemed to come up real quick and ended up with tyres squealing around most of them. Last corner was the worst, think we got a bit worried as it got tighter and tighter. But all great fun, next time I’ll pre-book and get a couple of extra goes.

We finally left the event at 4.45pm and decided to go back the easy but longer M25 route. Arriving back in Norfolk at 9.30pm having stopped at the services for a break. Over 450 miles covered in the two days, taking around 8 hours, averaging over 50mph, not bad going for the ol’ girl?

Thought it was about time we took a break from the just Triumph events and went to a multi-marque car show and, being one of the biggest, the Bromley Pageant of Motoring seemed the obvious choice. It must of been at least 20 years since the last time I took the old girl to Bromley. It would of been good to of compared it but things being what they are I couldn’t remember that far back. Anyhow, we decided to drive down on the Saturday afternoon and stay over so we could get there reasonably early on the Sunday morning. This also gave us a chance to meet up with some friends on the Saturday evening.

We ended up being one of only a few Heralds (I think there was only one other 1200) in the one make parking area. Plenty of Stags and Spitfires though. It made a nice change to go to a car show and see such a large selection / variety of cars on display, from Jap imports, custom cars, yanks, supercars and of course classics. Chris (being a bit of an American muscle fan) got to see a set of Mustangs from ’64-’68 and his day was made when a Dodge Charger arrived. Guess it’s time we went to a Mopar show…

Glorious weather saw me heading to Hepworth, near Diss for a local classic car museums open day and car show. Not the biggest show but a nice day out all the same and made a nice change to go somewhere that only took 20 minutes. Left the family at home this time, I think there’s only so many car shows I can drag them off to. And, with a couple of more shows I still want to go to this year, thought this would be a good one for them to miss. So instead, took a seasoned car show attendee friend on the off-chance I could learn what you’re meant to do at these shows to stop getting too bored. Talk to people apparently, it’s that simple… So amongst others, met a Midget driver eager to get back to Triumphs, and a Clubman couple with a long line of classics under their belt (with the photos to prove it).

As it turned there was a fair bit to do with stalls, model railway, farm machinery and even an appearance by the Stag Owners Club.

The first outing with the new hood. Joined other Club Triumph members at Eye for a convoy to Stonham Barns. We also had Emily (niece) joining us for the trip down and had arranged to meet my mum and sister there for a family Pimms ‘n’ picnic. Plenty to see and do, enough to keep everyone happy. East Coast Truckers, hovercraft rides and Robot Wars as well as the cars and of course the shops and garden centre that is Stonham Barns. Chris managed to meet his favourite car “Brum” (at least it was when he was 4). He even managed to blag his way into a ’66 Mustang for a trip around the field.

With the sun shining couldn’t resist having the roof down on the way to this one, all I had to do was convince the passengers but with it only being a 20 minute drive to Norwich managed to get away with it. Met and drove up in convoy with a friend and her Hillman Minx. It was good to see a few other classics on the way as well. Even got a beep and a thumbs up from a passing motorcyclist. Managed to blag our way on to the Club Triumph stand when we arrived at the Showground (which happened to be next to the East Coast Truckers where we met up with Mike of Mike Newman Haulage who gave Chris a ride in his truck on the ECT Convoy to Pleasurewood Hills a few years back). Always nice to park amongst a few Triumph friendly faces.

This was the second year of the show after the police pulled out of the Gala Day. Not as many cars as I remember but still a terrific show. There was a lot going on all day, too much to be able to see it all. But we did catch the Monster Trucks squishing cars.

A long day (we arrived before 10 and didn’t leave until 5) but a great day out.

Oh and many thanks to Elliot for the use of his chair.

Getting near the end of the show season now. We’ve done this one for a few years, the attractions at Duxford make for an interesting trip out. Spent most of the week beforehand checking the weather forecasts which went from sunny to rain to cloud to cloud with rain. As it turned out we only had a couple of light showers on the way down although Duxford does seem to suffer from lazy winds, they tend to go straight through not around you. Took a while to track down a Spitfire (there had be a pic of that one) most seemed to be in the restoration shed.

In spite of the weather there was a good turn-out of cars, reckon around the 150-200 mark. Not so many 1200s these days although there was two Courier Vans making these almost as common as the convertibles. Interesting red Herald conv. with an extended Coupe roof that worked well.

Prizes won by a Vitesse, Spitfire and TR. Good to see the small chassis Triumphs getting a few prizes. Although reckon the best car was a light blue GT6 that turned up later in the day, looked as if it was on it’s first outing. On the way back we had a mauve Vitesse following us all the way. Didn’t recognise it from Club Triumph so guess it must of been a TSSC member. Perhaps it’s time to try one of their meetings again. 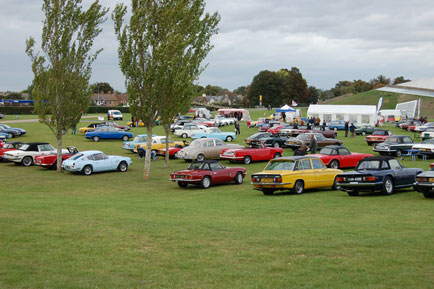 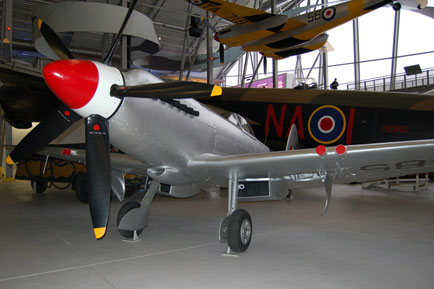 This is it, the last show of the season. Another week of checking the weather with rain forecast. But with the Travelodge booked we decided to go anyway even if it meant starting the trip driving in the rain. Leaving the Travelodge Sunday morning (pre-breakfast) just after a torrential downpour we arrived at the very wet campsite at Broad Farm, Fleggburgh where the usual field had been blocked off due to the rain. The convoy instead wound it’s way around the dirt tracks of the campsite waiting for the off.

With a start off time of 10am we managed to get ourselves a very nice bacon sandwich before the convoy started. A dry drive to a cold and windy Great Yarmouth seafront in convoy for the mile. Think we were a bit short with only 78 cars though, probably nearer 1/4 mile? Still good to see all those Triumphs along the seafront. After a brief walk along the promenade and a cuppa, we returned to the campsite for the afternoon show. I think the weather must have put a few people off because the number of Triumphs had dropped down to around 30, but we did manage to get some lunch and closer look at some the cars including the very nice Herald Courier van of Chris Gunby which won Car of the Show.

Luckily the rain stayed off foe the day and leaving mid afternoon we managed to get home just before the rain re-started. 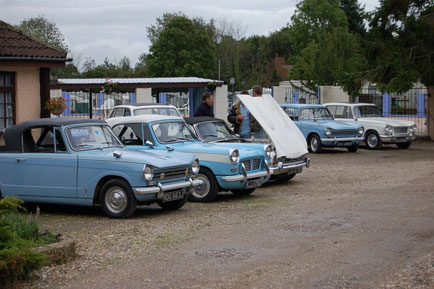