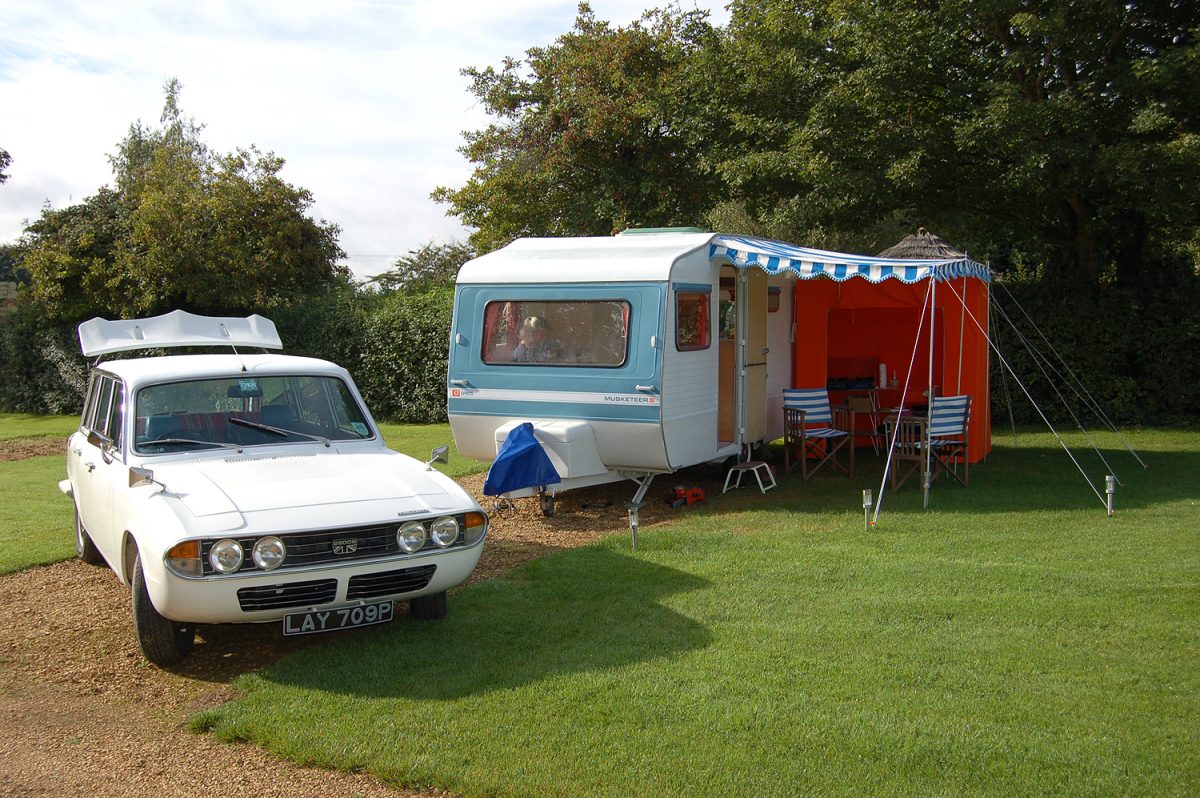 We had planned to go to the pre 1940 Triumph Club Picnic being held at the Walton Hall Hotel since I had suggested to the Triumph 2000 Register (now that I had found myself on the committee) that we use it for their 40th birthday celebration with free cake for big Triumph owners.

Like the Dales break the other week it seemed a shame to just go there for the day, so we decided to make more of a break of it. As we were helping organise it, it seemed obvious to take the Triumph 2500S estate along. So we had a deadline to get the Sprite Musketeer habitable.

Most of the rebuilding work was done. At least the cupboards etc were, in but still needing laminating. We had electric but no gas, but we were ready to go. The biggest problem was the Triumph running a tad hot. I’d flushed it through a couple of times before we went but it only seemed to make it worse. I had the feeling I was just pushing sludge around.

But Tuesday the day we were due to go, rain was forecast the whole day. For once I was happy to do a four hour drive in the rain with the caravan on the back if only because I figured the temperature would be cooler and better for the car.

We started off at 9am and luckily we met with only minor traffic and the temperature gauge didn’t get any higher than the 3/4 mark. We did stop halfway for a cuppa in the caravan. Followed by using the loo in the Sprite bathroom. A very useful facility that the Viking caravan hasn’t got.

Getting to the campsite for lunch, we spent a restful afternoon in the caravan after setting up. The rain cleared giving us a chance to pop down to the pub which unfortunately didn’t open for another hour. So back to the ‘van for our first night curry.

Wednesday was lie-in day, as I struggled to get over the drive and the two ring pulls I’d had the night before. A visit to Banbury to see the cross and do a bit of charity shop shopping before lunch and a four mile hike across fields in the afternoon.

Our last day of Triumphing until we leave on Sunday led us to Stratford upon Avon. A great place to visit if a tad ‘Bard’ heavy. A nice walk along the canal and around the shops in the town. Topped off with an ice cream and back to the caravan. Where the pitches opposite were taken, meaning we weren’t alone on our part of the campsite anymore. And, to make matters worse, ‘our’  toilet now had its doors locked meaning we now have to remember the keypad number for the main toilet block.

A look at the map showed us that the National Herb Centre was in walking distance, so Fridays day was sorted. A pub lunch on the way back rounded the day of nicely.

Saturday was a lazy day but still involved a five mile walk to the local shop for some bread (we also treated ourselves to some tea and cake sitting by the canal). Pack up time in the afternoon ready for our quick getaway on Sunday morning.

A quick wash for the car on Sunday morning before setting off for the Triumph picnic in time to help set up. 30 Minutes later we were lined up ready. A great turn out for the  Triumph 2000 Register with around 30 cars, more than any of the other triumph clubs that were attending (not that it’s a competition 😉 ). A really good day meeting big Triumph members for the first time and meeting old friends of the TSSC we hadn’t met for a couple of years. On mentioning my over heating problem to those that know the bonnet was soon up with work being done on it. 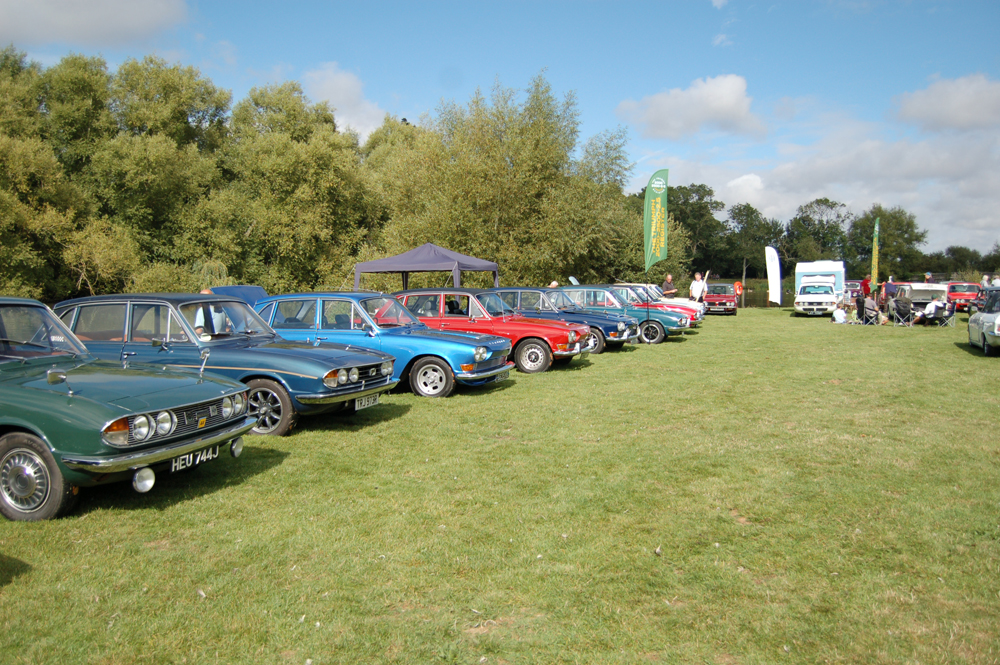 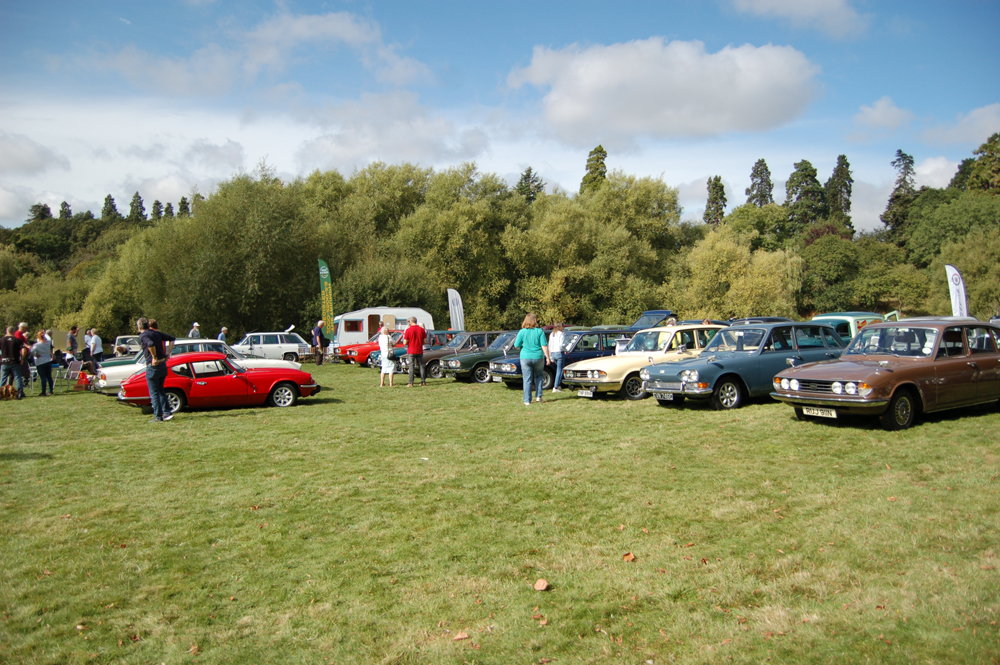 Leaving it as late as possible before heading home on the off chance the temperature would be cooler. We got as far as the A14 before the temporary gasket fitted during the afternoons attempts at fixing things gave out. This was suitably replaced with a bit of cardboard and on we carried. After a stop at the services for a break the dipped beam gave out, so with gaffa tape applied to the main beam to stop it shining at oncoming vehicles we continued. It would be nice to get this Triumph as reliable as the Herald!