Classic car outings in 2012, including Langley, Euston Park and Worstead

First outing of the year. With a last minute offer of some company decided to take the drive into Suffolk to the Ufford Car Rally. Very cold but sunny start saw us getting there a bit early – in fact we were the first classic to arrive, beaten only be three vintage cars. Field soon filled up to capacity. Classics were outnumbered by a great selection of vintage cars including Bentleys, Lagonda etc.

A small but very eclectic show with a good run through the countryside to get there and back. 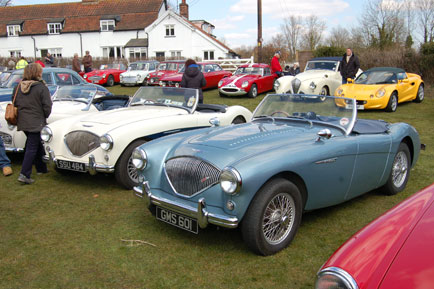 Cancelled from earlier in the year due to bad weather this one now clashed with one of Chris’ basketball games so good old Trevor was called upon to keep me company. Picking him up from Attleborough in the rain wasn’t a good start. returned home to meet up with friends with a Hillman and MG we convoyed up the A11. Meeting up with Club Triumph members at Loddon found ourselves surrounded by MGs. Arrived at Langley School for a very nice bacon roll.

The weather didn’t seem to get any better during the day other than the occasional sunny spell. Weather apart a good show again with plenty of craft stalls and a good selection of cars – seems to be getting bigger every year. Leaving at 3.30 the rain started to poor about halfway home.

Last minute decision to go to this one. Turned up late and without booking but was luckily led across the field to park up amongst the other classics. Wasn’t expecting much from this show so was pleasenly surprised by the number of things going on. The usual stalls and some arena displays, which included a walk around by some classic(?) lawnmowers which seemed a bit strange.

Had a good day and the weather was kind. Met up with a couple of others for a convoy home.

Last minute decision to go to this one. Turned up late and without booking but was luckily led across the field to park up amongst the other classics. Wasn’t expecting much from this show so was pleasently surprised by the number of things going on. The usual stalls and some arena displays, which included a walk around by some classic(?) lawnmowers which seemed a bit strange. Had a good day and the weather was kind. Met up with a couple of others for a convoy home.

The start of a busy weekend of car shows. First one a return trip to Enfield. Good drive down there. Although the A11 was blocked the opposite way by an accident and, incidentally an even worse accident with a car on it’s roof on the A11 on the way home but again on the opposite side. Plenty of cars and loads of stalls but not one with the clips I was looking for. Being a Saturday there wasn’t any arena events, so guess the best day is the Sunday.

Second show of the weekend, although this one had a much later start and was much closer. Chris came along dressed in his best mod suit (dress to match your car). Not a lot there to be honest, but masses of people enjoyed a sunny day, in fact probably one of the busiest car shows I’ve been to.

What was meant to be a nice sunny day turned out to be a tad cloudy. Peg number had put me in with other Club Triumph folks and a good bit of nattering was done. As usual plenty of things to watch although very much a country type fair with lots of dogs and horses. Great showing of classic cars as well though.

Did this one last year and enjoyed it. This years was even better. Probably helped by the good weather. Great selection of cars. Some are getting increasingly repetitive though and I have to try hard to remember those that I’ve already taken photos of. I guess my car is probably having the same effect on other people…

This was an interesting one, very much for enthusiasts as opposed to the public. Good selection of cars including three other Heralds and a Vitesse. One of the Heralds sported a Rover V8 and widened wheelarches. Had a good look around but there wasn’t much there to keep you amused. It was a good day for a drive and had a really good drive home.

Amazing, the only way to describe it. Amazing selection of cars (around 700). Probably one of the biggest shows I’ve been to, great to have something as big as this in Suffolk. Chris kindly kept the old man company and really enjoyed himself especially when we caught sight of a real nice metallic maroon Charger. Yanks were well represented with four Trans Ams amongst the bigger machines. Another great touch was the run down the drive by a select few classics. Good to have something to watch and makes a good break from the static displays.

Two Sundays in a row I’ve managed to drag Chris out to a car show. Had a slight panic on this one as to whether we had the right day as we drove alongside the Norfolk Showground and couldn’t see any cars there – turned out the show was held in one of the car parks. Fairly good turnout for this one, plenty of new cars as well. But not as good as the previous week at Helmingham. Weather stayed dry which was a bonus and had a good time chatting to some great people.

The fifth Sunday in a row I’ve visited a car show. Trevor drew the short straw this weekend and came along for the day. Last went to this one in 2010. Arrived early enough to take a wander around the boot sale and grab a bacon roll. Large selection of cars along with some auto jumble and good weather made for a great day. Even took the old girl around the arena in the afternoon.

I’d been looking forward to this event after it was announced it was back on in August. The last two years have been fantastic and this years event wasn’t a disappointment – a great way to end the season. The second classic to turn up before 7am ready to get going. Drivers briefing over and sound test done and out on the track we were. Not as many people this time but a lot more driving. We were encouraged to go out as much as possible to make the track look busy. Met up with some really nice people including the driver of a Golf GTi and the pair of us couldn’t stop chasing each other around the track. Resulting in me almost losing it around one bend when being chased and the Golf lifting it’s hind wheel by almost 10″ as I chased him around the same corner.

A great day that ended all to soon. Although it was probably more interesting for those driving than walking around. Chris had to have a ride around in a Camaro SS at the end of the day as the track started to get damp. Heard a screech of tyres and a black roof spinning around then remembered the Camaro had a black roof. Went to have a look and there he was facing the wrong way down the track. Needless to say Chris got out with a massive grin on his face…