As the UK was about to go into new lockdown restrictions on Monday this looked like it was going to be the only car show I attended this year. This was to be the first show that the Triumph 2500 went to to after it’s recent respray.

A popular show with plenty of autojumble stands and a very varied selection of cars. Another car run that we couldn’t go on because we were organising it. For this run we tried something a bit different to lessen the numbers at any one location due to Covid.
We arranged the run to start at 2pm from a choice of any of seven locations completing the rest in any order. There was three points to be had for getting each question correct. But the real points were in photographing other classics. Three points for catching one at a location. Five points if you got more than one at a location and five points if the navigator managed to snap one while on the move.
Eleven classics turned up including three TR7s, three Spitties, a Herald, T2K along with a MG and a couple of big Yanks.
Judging by the photos that we had sent in a lot of fun was had. We just wish we could have been joining in instead of waiting with tea and cake at the refreshment stop. 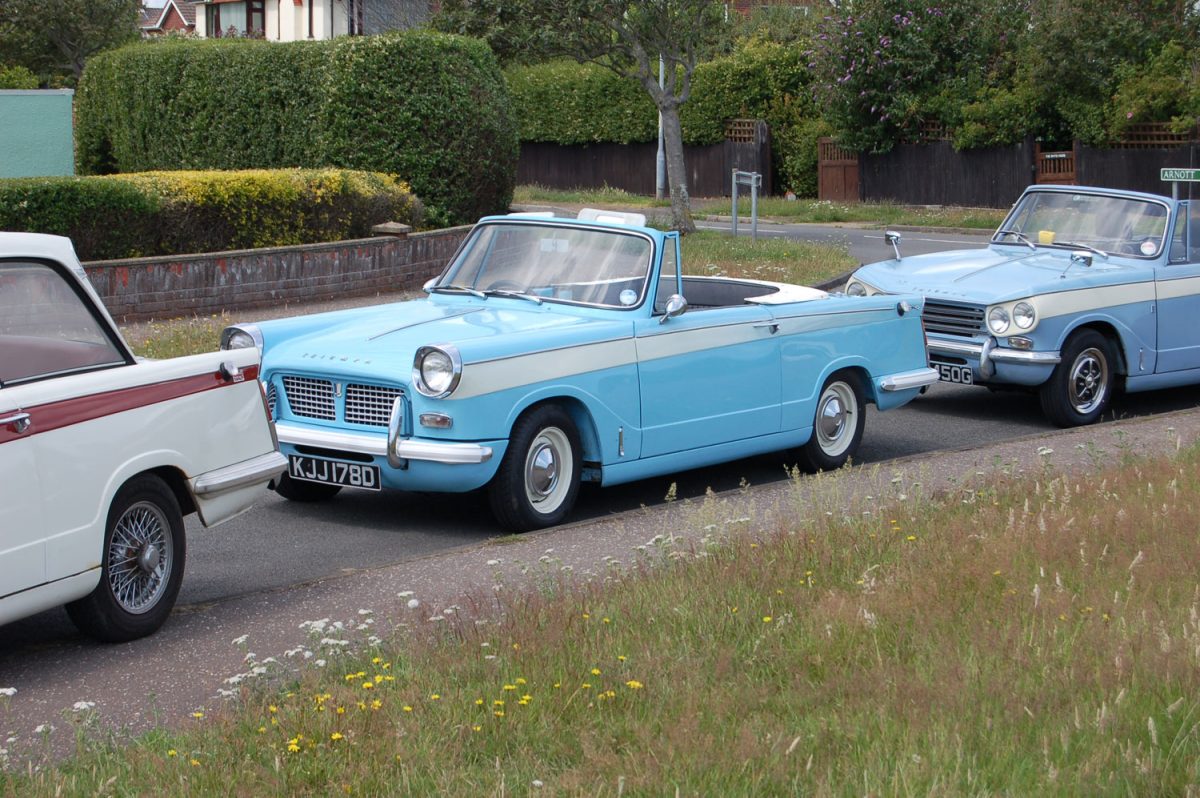 Having only done 400 miles since I replaced the head back in March due to the lockdown. A car run with route map that we weren’t organising seemed like the perfect opportunity to get the magic 500 miles done so I could re-torque the head.

Meeting up at the Easton lay-by for 10. With a route map in our grubby mitts we set off. We had a TR7 and Vitesse neither of which had a co-pilot following us. We soon caught up with another convoy of three Vitesse. Again with only the lead car with co-pilot who unfortunately took a wrong turning. The other two got it right and at the first “clue stop” dropped in behind us. So we now had a TR7 and three Vitesses behind us. Pressure was on the map reader!

At some of the “clue stops” there wasn’t room for our convoy to stop so we trundled past with eyes peeled.

Final stop was Gorleston seafront for a spot of lunch and a natter. Great first outing after lockdown. It took a while to decide wether to do this one or not. But the TSSC were incouraging it so a post on the local facebook page saying we were doing it cemented the idea and gave us no going back. On the day we also had two other cars participating (MG and M Minor) in the village. The TSSC Norfolk post pushing it made it the busiest run the Norfolk area had had for a few years with 16 cars participating. We had quite a few passersby that seemed to appreciate something else to look at on their allocated one walk a day.

Now just waiting for the Coronavirus lock down to end. 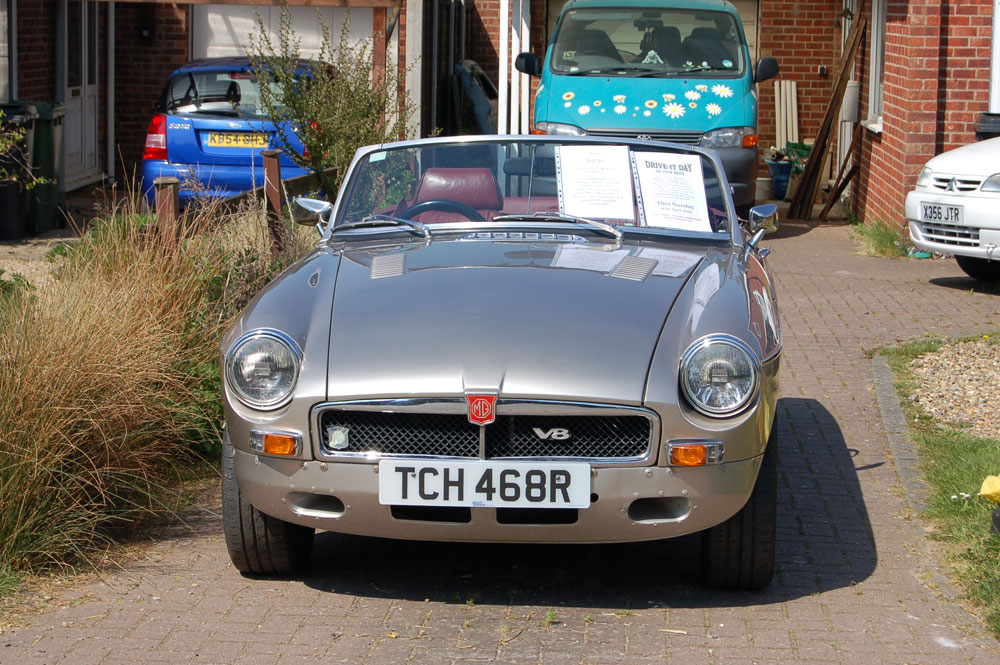 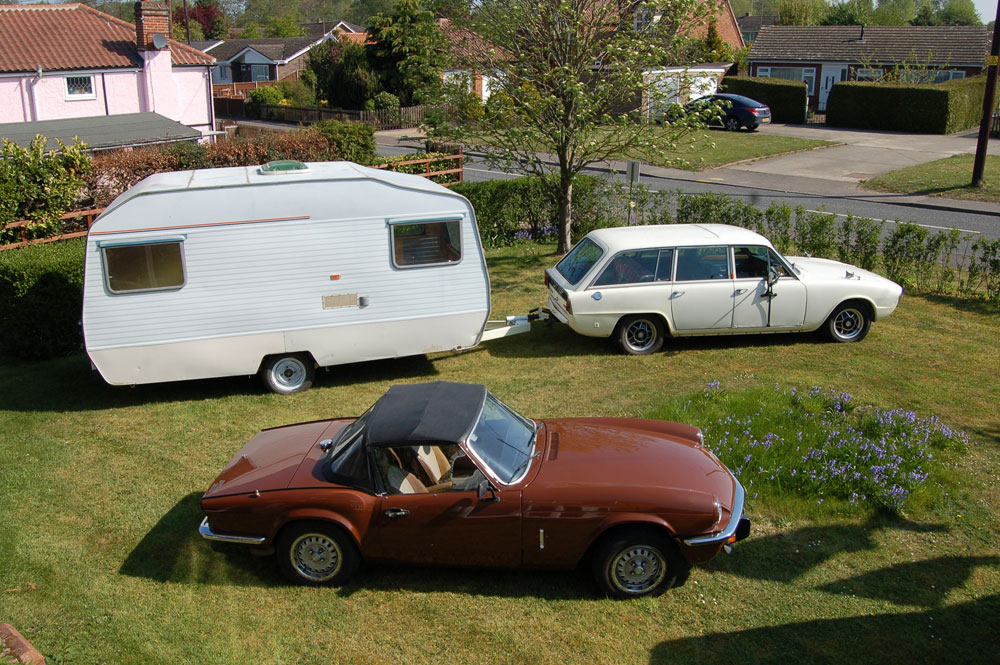 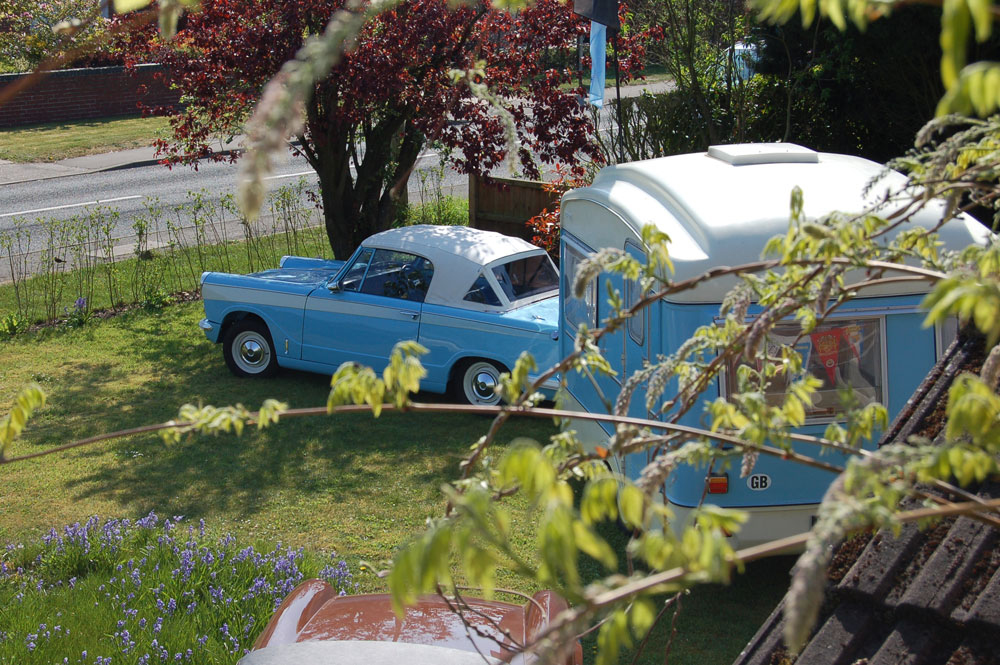 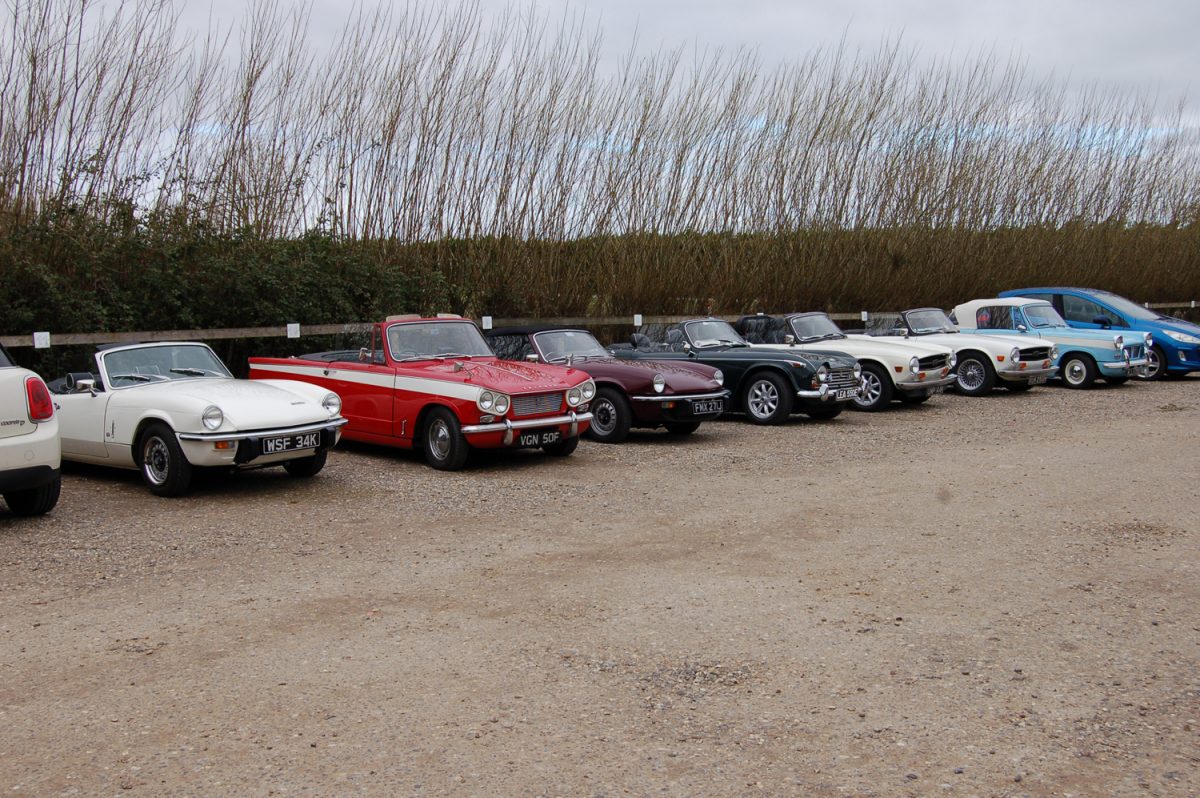 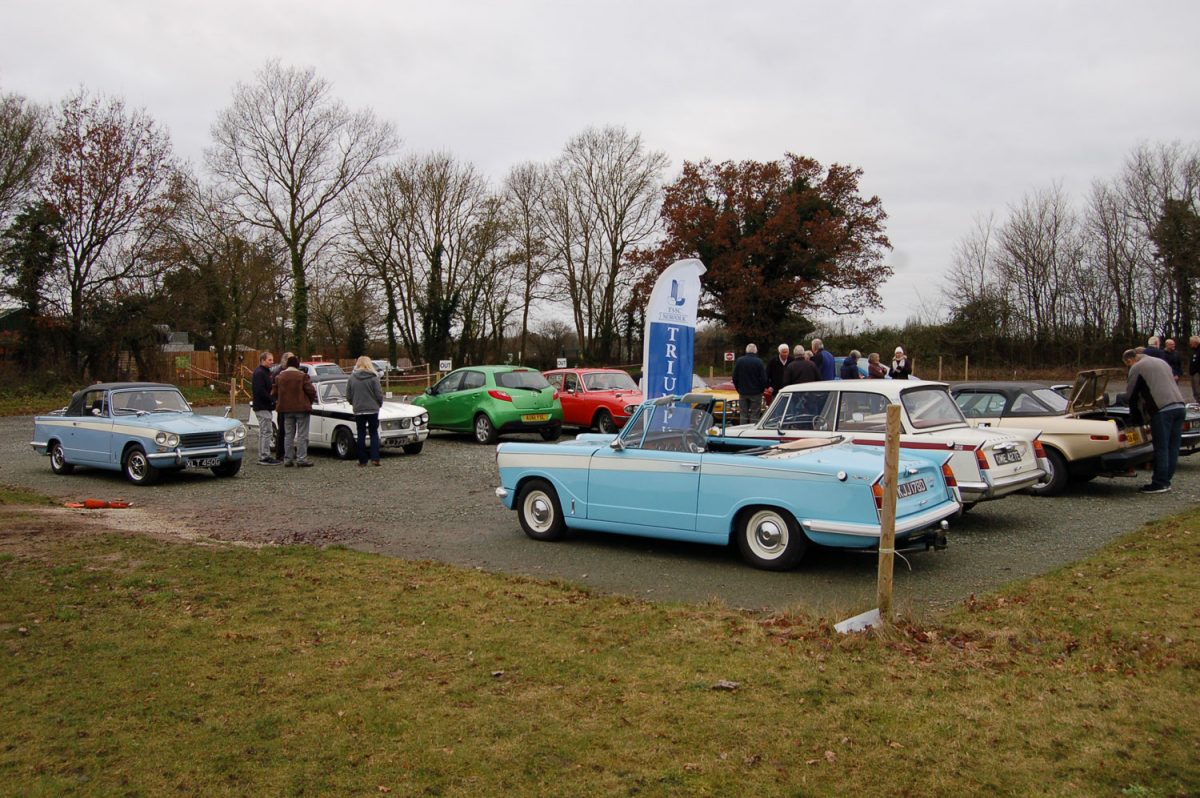 Our first attempt at organising a tulip rally as part of the TSSC. Route planned using Google and a trial run done using a modern car for accurate mileage (the Heralds is 10% out the 2500S um, still doesn’t have mileometer that works).

We had two starting points, Swaffham market place and the Easton layby where Mike was handing out route sheets. A great turn out of 23 people with eight triumphs taking part including quite a few new faces. A fifty mile run ending up at Peter Beales Roses for brunch. While we didn’t take part on the run itself on the day we were driving across the countryside taking pictures at various stages.

I think/hope that people seemed to have as much fun doing it as it was organising. I think this might be the first of many. This was to be my third trip to the NEC classic car show. But this time it was to be a bit different. Christina had had enough sitting in drafty exhibition halls for three days, so I called on my second choice Chris. Unfortunately he had to drop out at the last minute, which meant, I was driving up on my lonesome. This would be my first time driving the combo on my own.

Following the weather forecast and with rain due on Thursday I decided to drive up Wednesday afternoon. Leaving just after lunch with only the satnav for company (although with only three roads it was an easy drive and a very quite copilot). I arrived at the campsite after dark and by the time I’d had my curry a few other RCCers had turned up. So my beer and I ended up in the warmth of Chris and Cams camper. This was followed by a rather cold night reminding me why caravanning was best kept to the warmer seasons.

Thursday morning saw us convoying to the NEC and then setting up our “Carry On Camping” stand. Dan, my replacement room mate, and I couldn’t get into our room until after 6.30 so we followed the rest back to the campsite (thankfully Dan had a tow truck to commute with). From there we went to a local pub for what turned out to be a very nice meal accompanied by plenty of laughs. We didn’t get back to our AirBnB until around ten. I’m not sure our host was that happy having a flatbed truck parked outside his house but he took it well.

Friday was the expensive day for those paying to get in which meant the crowds weren’t too bad. In the afternoon, being shortlisted for a prize, we got an invite to the awards ceremony. The nomination was for Best Medium Stand which unfortunately we didn’t get. But, we did get a very nice sit down curry with free drinks. Unfortunately Dan and I completely forgot where we had parked the truck which delayed our departure by 30 minutes.

The first thing we did on Saturday was to go and check on the winning stand. Which obviously wasn’t anywhere as good as the RCC one. Hall 5, which we were in, was much busier than hall 8 that we had been in last year. The evening was spent at TGIFridays. After which Dan and I again forgot where we had parked that morning and had to spend a good 30 minutes wandering around in the pouring rain before we tracked the truck down.

We managed to get to the hall early on Sunday allowing me to walk around the halls taking photos and buying bits before the crowds arrived. The end of the day took a long time coming. With rain forecast on the Monday I decided to drive home on the Sunday evening. Which, as it turned out, was a good choice. Even though it was dark it was a really enjoyable four hour drive. And then it was over, I had done it. My first outing with the combo on my own.

While it was a very long weekend having the Carry On Camping theme seemed to make everybody smile as they came onto the stand. It made talking and joking a lot easier when people were smiling, much easier than when they are straight faced. A great weekend. 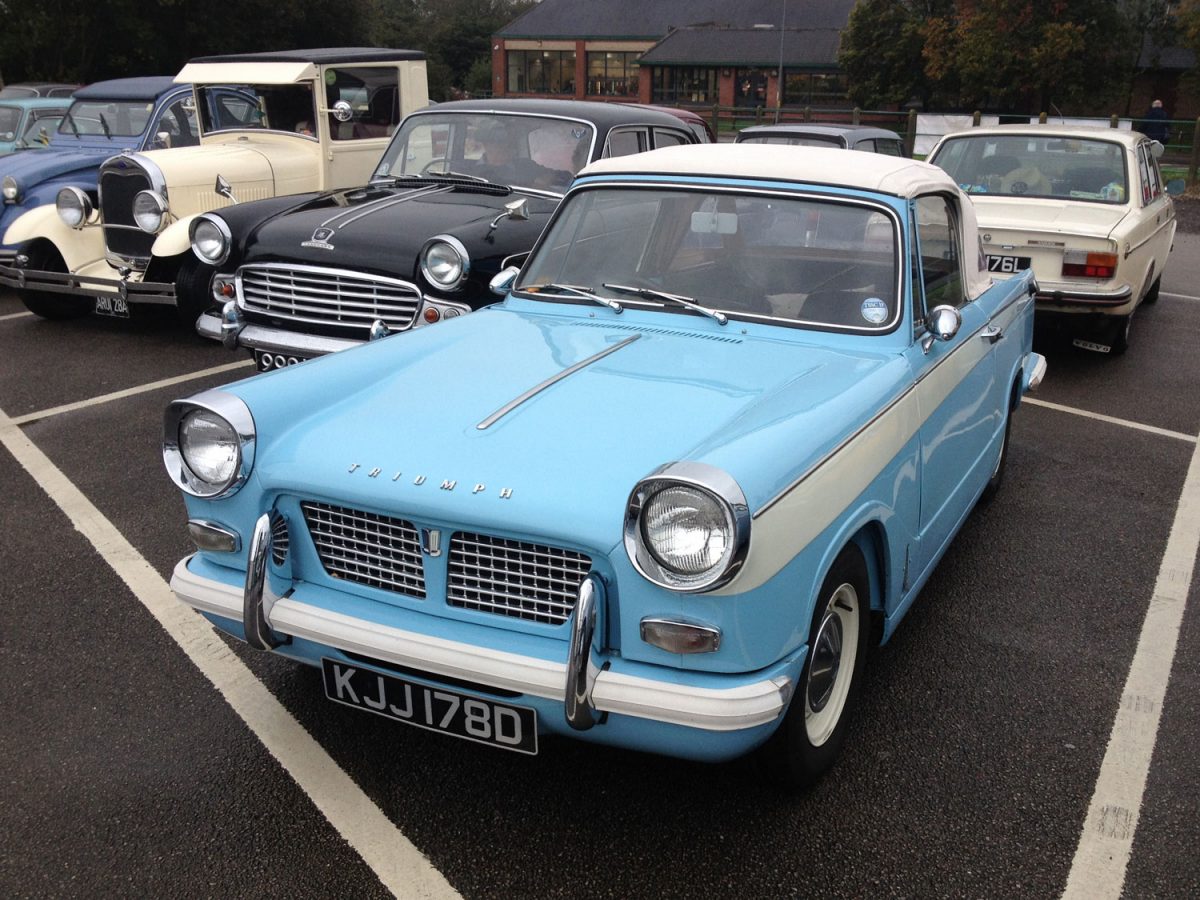 Another local show. One that we had booked into a few months ago. Although the weather didn’t look too good for the day, much to our surprise there was quite a selection of classics in Dereham station car park. After parking up, wandering around the cars and chatting to a Vitesse owner who remarked on our lack of a caravan we headed for the trains. The classic car day was part of their diesel day.

After a forty minute ride we ended up at Wymondham and had a wander around the town. Getting the return train back by lunchtime. Again pleasantly surprised by the number of classics still parked up. By the time we had had a bite to eat and a walk down to the DIY store for a few bits the car park had started to empty. Making it easier to leave without being noticed. It made a good relaxing day. We were lucky the weather held too. Only raining when we were on the train. A slightly different showing for this one. Our family of three Triumphs lined up at what was a very small affair. But close enough that we could walk back for the next car. A last minute decision to go on what could be our last outing in the caravan this year. Although it is a bit like mowing the lawn for the last time. You don’t know it’s the last mow until a month has gone by without the grass being cut.
This weekend away was two-fold. Firstly to go to a car show that fellow TSSC member Will was organising at his local village hall. Secondly, to meet up with some friends who were yachting on the Broads.
With the weather looking warm and sunny and realising that if we stayed at home we probably wouldn’t stop we were looking forward to a relaxing weekend. With only an hours drive it was easy to get to the campsite by lunchtime. Lunch was followed by a short walk around what turned out to be a lovely village. The evening saw us taking a short drive to meet up with Karen and Andy and watch them wrestle with their yacht followed by a meal in The Dog.
On Saturday we took a longer walk including a board walk to the edge of Barton Broad. Followed a a quick pint in the local pub.
Sunday was show day and we were one of the first to turn up to get the combo parked up while there was still room. We weren’t too sure what to expect but there there turned out to be around 40 vehicles on show. A very eclectic mix from a vintage Rolls Royce and Mercedes Benz
300 SL to a host of MGs and another Herald.
The journey home was made with the roof down. Which probably should have been up. But we didn’t get too wet.