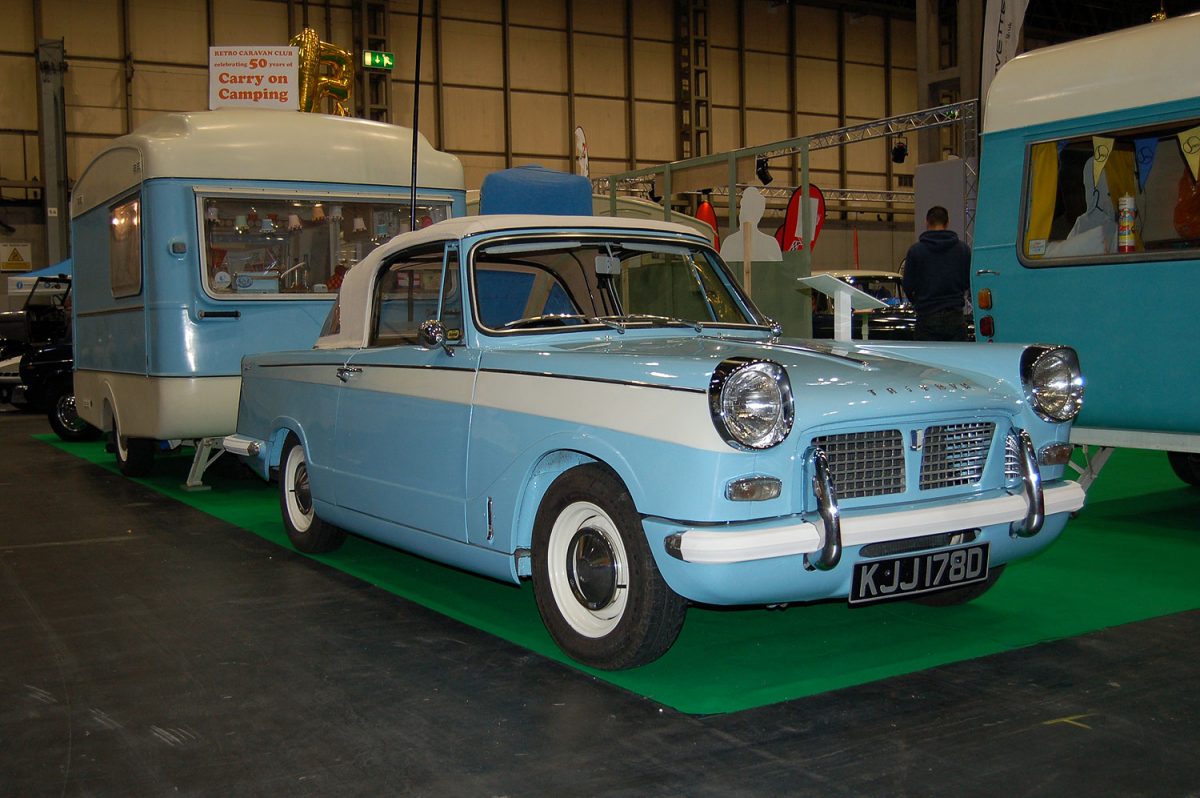 This was to be my third trip to the NEC classic car show. But this time it was to be a bit different. Christina had had enough sitting in drafty exhibition halls for three days, so I called on my second choice Chris. Unfortunately he had to drop out at the last minute, which meant, I was towing the Viking with the Triumph Herald up on my lonesome. This would be my first time driving the combo on my own.

Following the weather forecast and with rain due on Thursday I decided to drive up Wednesday afternoon. Leaving just after lunch with only the satnav for company (although with only three roads it was an easy drive and a very quite copilot). I arrived at the campsite after dark and by the time I’d had my curry a few other RCCers had turned up. So my beer and I ended up in the warmth of Chris and Cams camper. This was followed by a rather cold night reminding me why caravanning was best kept to the warmer seasons.

Thursday morning saw us convoying to the NEC and then setting up our “Carry On Camping” stand. Dan, my replacement room mate, and I couldn’t get into our room until after 6.30 so we followed the rest back to the campsite (thankfully Dan had a tow truck to commute with). From there we went to a local pub for what turned out to be a very nice meal accompanied by plenty of laughs. We didn’t get back to our AirBnB until around ten. I’m not sure our host was that happy having a flatbed truck parked outside his house but he took it well.

Friday was the expensive day for those paying to get in which meant the crowds weren’t too bad. In the afternoon, being shortlisted for a prize, we got an invite to the awards ceremony. The nomination was for Best Medium Stand which unfortunately we didn’t get. But, we did get a very nice sit down curry with free drinks. Unfortunately Dan and I completely forgot where we had parked the truck which delayed our departure by 30 minutes.

The first thing we did on Saturday was to go and check on the winning stand. Which obviously wasn’t anywhere as good as the RCC one. Hall 5, which we were in, was much busier than hall 8 that we had been in last year. The evening was spent at TGIFridays. After which Dan and I again forgot where we had parked that morning and had to spend a good 30 minutes wandering around in the pouring rain before we tracked the truck down.

We managed to get to the hall early on Sunday allowing me to walk around the halls taking photos and buying bits before the crowds arrived. The end of the day took a long time coming. With rain forecast on the Monday I decided to drive home on the Sunday evening. Which, as it turned out, was a good choice. Even though it was dark it was a really enjoyable four hour drive. And then it was over, I had done it. My first outing with the combo on my own.

While it was a very long weekend having the Carry On Camping theme seemed to make everybody smile as they came onto the stand. It made talking and joking a lot easier when people were smiling, much easier than when they are straight faced. A great weekend.