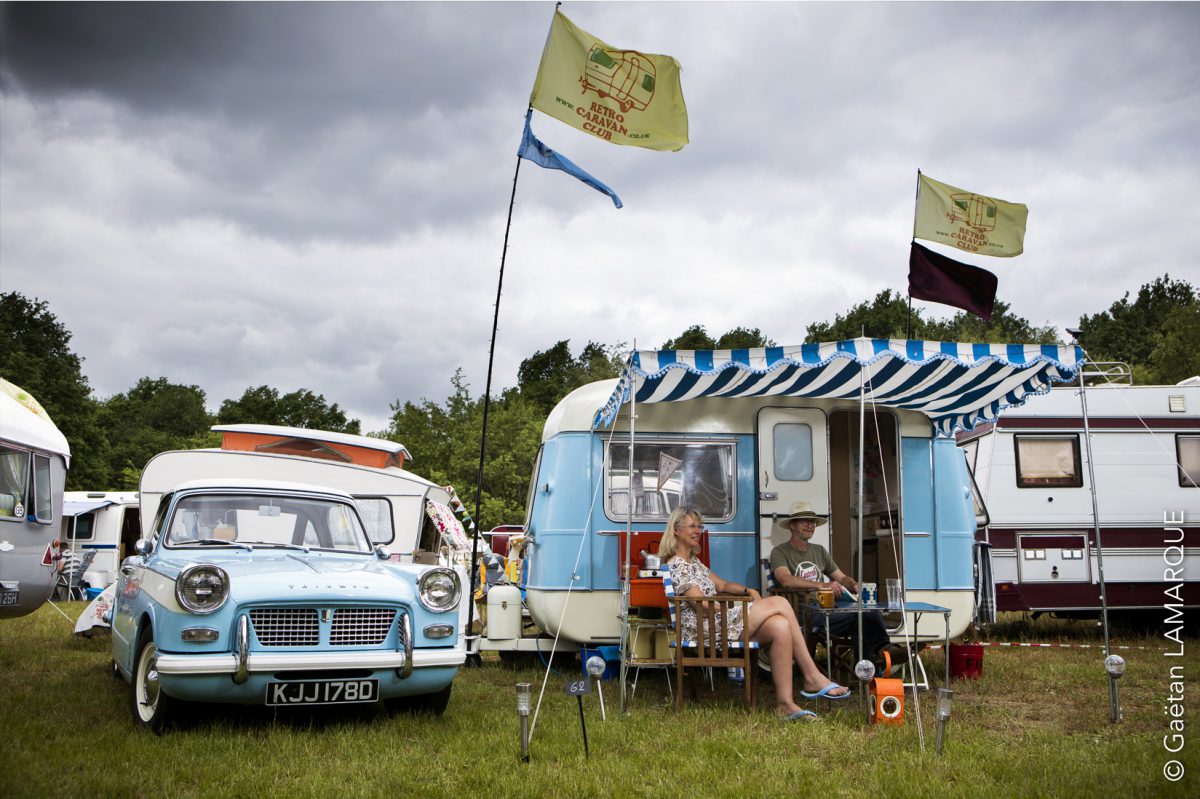 After the disappointment of having to leave her at home when we went to the Isle of Wight and 2 weeks of will she/won’t she be ready for Europe, with well-cleaned valves and a new head gasket, and compression back to where it should be, the Herald was ready to be reunited with the Viking – our combo was complete again! Allowing ourselves plenty of time to get to Dover for our 1.45 ferry, we actually arrived at 12.10 and were told we could go on the earlier, 12.25 crossing. Once on board we could see why – the ferry was almost empty. We found ourselves some seats, bought a drink and ate our packed lunch. Paul had a quick chat with the owner of an Austin Healey who had overtaken us on the approach to Dover before nodding off. By 2pm we were returning to the car and on our way. It was just a short journey to our first campsite and so by 4pm we were set up and relaxing with a cuppa and a slice of cake.

We caused quite a stir as we drove in and within minutes had a couple coming to tell us that they had a Triumph Herald when they got married in 1966.

The campsite was lovely, just 40 pitches, only about half of which were occupied. Each pitch was demarcated with willow trees, which gave the feeling of camping in an orchard. We walked to and round the local town and had a drive out on the Friday to the Dunkirk beaches. All in all, a very relaxing time. Knowing what the next site was like, having stayed there after ECCR 2017, I would have been quite happy to stay at De Panne but it had been agreed that we would meet the rest of the RCC contingent on Saturday, so we packed up and had a leisurely drive along the coast road towards Ostend, then inland to Jabekke. We arrived in time for lunch and then sat in the sun waiting for the rest to arrive. By the evening there were 12 RCC caravans with 2 more due the next day. The rest of the time at Jabekke was spent socialising, walking and, on Monday, a drive out to the Museum aan de Ijzer – translated as ‘On the Yser’ – which is a European Peace Site with a museum depicting WW1 from the point of view of the Belgian and Flemish people. The elevator takes you up to the 22nd floor with its glass walls looking out over the Belgian countryside (an additional two flights of steps take you to the outdoor viewing terrace). A slow walk back down sees the museum spread out over each floor, telling the story of how WW1 unfolded, and the part played by Belgium in the conflict. We spent a very though-provoking 2 hours making our way down to the ground floor, where an ice-cream van was conveniently waiting to sell us some delicious ices. A quick stop off at the supermarket on the return journey and then an evening spent chatting and packing ready for the last leg of the journey to the ECCR.

After congregating in the carpark, we were all ready to convoy the final 80 miles to the ECCR. The journey went well, and we were among the first ‘foreign’ arrivals, which meant that we were able to get a good area, with all of us together. With a total of 23 caravans we made 4 rows, arranged in 2 streets, we appeared to be the biggest group within the rally. Once the flags and bunting went up it was impossible to miss us! After a quiet night on camp, Wednesday was spent watching the rest of the caravans arrive. There really are some beautiful combo’s around and this gathering is definitely the place to show them all off en-mass.

After the opening ceremony on Thursday evening, where we were welcomed with prosecco and nibbles, the RCC members gathered together for the now traditional ‘bring-your-own-meal street party’. Having ordered our fresh bread on Thursday, as soon as we woke up on Friday morning, we (Paul) had to go over to the marquee to collect our croissants and baguette for breakfast. Friday proved to be warm and sunny and so we had a lazy start to the day, sitting outside the caravan and chatting to other club members. Several of the others went out to the shops and we decided to drive out to a local beauty spot to go for a walk. However, on the way there we both remarked that we could smell petrol, so Paul popped the bonnet and discovered that there was petrol spewing out from the carburettor, so we decided to abandon the walk and get back to the campsite as soon as possible, stopping only to get petrol and some provisions at the local supermarket. Of course, back at the caravan, as soon as to bonnet went up there was a collection of men offering to ‘help’. A couple of these really were helpful, the rest just a bit annoying! Unfortunately, in the process of sorting what he thought would be an easy fix, Paul broke off a bracket which was pretty vital. Fortunately, Alan was able to drive Paul to a car spares shop about 25 miles away where they bought a tube of epoxy resin to stick the piece back on. As a safe-guard, Paul also fashioned a temporary replacement from an empty drink can, just in case the glue didn’t work. Once stuck, it was just a case of waiting for it to dry and hope that it worked. The Friday evening entertainment was beer tasting and a rock-and-roll dance class, with caravanners having been encouraged to dress in 50’s or 60’s fashion. Trying to follow dance instructions in Belgian proved to be a bit tricky but we learned a ‘stroll’ as well as a couple of jive moves.

Saturday morning dawned and promised to be another hot day. Paul felt hopeful that the glue had worked, and intended to go for a short drive out just to check that we were good to go, but by the time we had tidied up the ‘van for the open caravan session, and had set out a few things for sale at the ‘flea market’, it was getting a bit busy with people looking around at the goods for sale so we decided to stay put and chance it in the morning. We spent a pleasant few hours looking around and managed to buy a retro kitchen stand for or next caravan, and a very retro toilet to go in our toilet tent. Both will need a bit of restoration but should look good once done. By late afternoon it was time to pack away ready for an early departure next morning, then a shower ready for the Saturday evening closing ceremony, communal meal and band. We had a nice meal but the length of time it took to get everyone through caused lots of discussion as to how we can prevent the long queues when the RCC host the ECCR next year. The band struck up at about 9.30 and we had fun dancing until 11.00 when we returned to the caravan for a much-needed sleep.

We woke up at about 7am on Sunday morning, did the final packing, bid our farewells and left with fingers crossed that the car would be ok. The journey to Hook of Holland was pretty uneventful, just a small traffic jam neat Antwerp, which caused a bit of a worry as it was so hot, but we got through it and arrived at the port at about mid-day. After boarding we found our cabin, had some lunch, then a walk around the deck, before settling down for a snooze. All in all, the crossing passed in a very relaxed way, we even managed to freshen up with a shower before dinner and the drive home.

So, now back home, what can I say? Another fantastic performance from the little blue Herald, with just a peppering of tlc from Paul 😉